JUBILEE in the Vabaduse Gallery 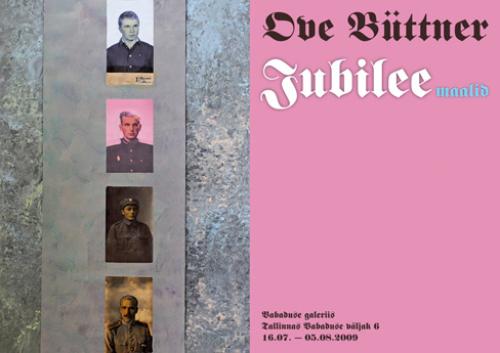 JUBILEE is one of the exhibitions by which the painter celebrates his fiftieth jubilee.

Ove Büttner is a painter who has been studying, and practices painting techniques of different eras. His in every way recognisable world of paintings has been shaped by the historical and artistic Zeitgeist imbibed from, first of all, domestic, but also from German, Russian and other cultural spaces. During his painting activities for over thirty years of time, Ove Büttner has managed to interpret on his paintings premodern pointillist illusions of the art of painting, identify himself with the Netherlandish masters painting Madonna, develop mythological historical and animal allegories, and in the recent years, delved also into cultural anthropological genealogist studies in artistic form.

At the present jubilee exhibitions the painter, in turmoil of his creative spiral, addresses again to the important stages in his artistic life. On the canvases presented at his jubilee exhibition in the Vabaduse Gallery, he returns to abstract vortices of paint. Harmonic dynamics that call to one’s mind cosmic explosions are brushwork, developing further traditional oil painting and acrylic techniques. This is the world of Ove Büttner’s art of colours, the artist’s element, where he had so far lived and unmistakeably continues to exist in the future. The other — and of equal strength — part of the exhibition consists of two canvases of enlarged portrait copies of family photos from different period of time, painted in the academic nearly monochromic style. The spear side of Ove Büttner’s family wears on these portraits military uniforms that identification marks also specify the course of history of their native country in the inevitable connections with the persons, who have been living it through.

In 1919 Ove Büttner’s grandfather, a schoolboy, buckled on the uniform of the Army of the Republic of Estonia and went to the battles of the Estonian War of Independence. Uniforms were taken into use at that time; in the year before, soldiers engaged into the Estonian War of Independence in civil clothing or in the greatcoats, donated by the British Army. The farther of Ove Büttner has served in the Soviet Army. He was mobilised, because his turn for call to arms came with Soviet occupation. The photo of the Great-Grandfather has been in turn taken during the WW I, where he wore the military officer’s uniform.

In 1979, Ove Büttner, who had been called to compulsory military service, was absent without leave from his military unit in Murmansk; otherwise, he could not have sent his family this photo, conceptualised for this painting.

The inevitability to live in a certain era and the wish to live in one’s native country evokes the need for Zeitgeist and find necessary personal opportunities for oneself. Ove Büttner made his vital decision in 1981. He applied to work as a restorer of paintings at the Art Museum of Estonia, studied in the now Estonian Academy of Arts, specialising in panel painting in 1983–1989, and began his journey as a freelance painter in 1989.